Science is nothing but developed perception, integrated intent, common sense rounded out and minutely articulated 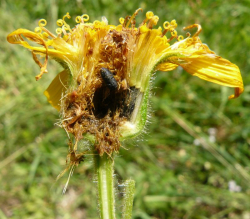 The biological diversity of montane regions may be threatened by predicted climate change. Low mountain species frequently cannot respond to climate change by migrating upward, but only by plasticity or genetic adaptation. Predicted climate change will not only result in changed environmental conditions, but also affect biotic interactions. The aim of this project is to study the possible impact of climate change on the interactions of the threatened plant species Arnica montana with both generalist herbivores and a specialised parasite, the seed fly Tephritis arnicae. We will investigate the impact of herbivory and parasitism on the model species A. montana along an altitudinal gradient, investigate defenses against herbivores using metabolomic profiles, and experimentally study how plant-animal interactions would be affected under predicted climatic change. Population sizes of generalist herbivores are foreseen to increase in upland regions which may threaten the survival of mountain populations of plants that may be less defended against herbivores than lowland populations. We will also study genetic variation in metabolomic profiles and herbivore resistance among and within populations and its importance for adaptation to changed conditions. The population biology of A. montana is currently studied in a PhD project (AFR FNR Grant) hosted by the MNHNL. The proposed PhD project will take advantage of the knowledge about the population biology and quantitative genetics of A. montana obtained in this study and use two common garden experiments already set up at high and low altitudes. The expected results of the project will contribute to a better understanding of the genetic and metabolomic diversity of rare and endangered species and its importance under the scenario of projected climate change. The outcomes will also have implications for the conservation and management of biodiversity and allow a better understanding of the role of systems biology in biodiversity conservation.