There’s real poetry in the real world. Science is the poetry of reality 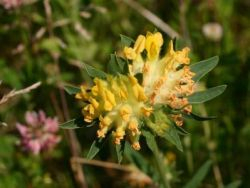 Climate is a key factor determining plant distribution. Predictions of rapid climate change have resulted in a renewed interest in the possible responses of plants to changes in climate, such as migration to other localities, phenotypic plasticity and local adaptation. The aim of this project is to study the possible impact of predicted climate change on the short-lived perennial plant Anthyllis vulneraria along environmental gradients. We will analyze natural populations and their habitats along altitudinal and latitudinal gradients to investigate relationships between population characteristics and environmental conditions. We will also investigate molecular genetic diversity in relation to the same gradients. The variation in a number of quantitative traits and its distribution among spatial scales will be studied in a lowland common garden and compared with that of the variation in neutral genetic markers.

We will test whether plants from mountain and high latitude populations perform less well under lowland conditions than plants from lowland and central European populations, and whether genotypes exist in the mountain and high latitude populations that are preadapted to the predicted warmer future conditions. Plants will be genotyped to detect loci correlated with ecological gradients which are of ecological relevance in A. vulneraria.

Predicted higher temperatures are likely to increase the frequency of drought. To assess the role of plasticity and evolutionary adaptation in the response to increased droughts, both the plastic responses of high latitude / altitude and lowland populations to drought and genetic variation in drought resistance will be studied experimentally. The expected results will contribute to a better understanding of the role of plasticity, genetic diversity and local adaptation of short-lived grassland plants under predicted climate change. The outcomes will also have implications for the conservation and management of biodiversity.