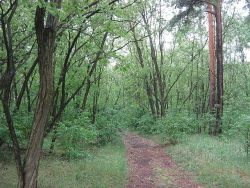 The aim of this PhD study is to assess the invasion of the legume Robinia pseudoacacia in Europe and its effects on understory vegetation in terms of species composition and richness, with a focus on other alien species, which might have advantages, growing under this alien tree species. Furthermore the effect of urbanization will be taken into account. Until now Robinia is known to invade dry grasslands and urban wastelands, thus diminishing their usually high biodiversity. In woods it is known to respond well to anthropogenic disturbances and coppice forest management. All previous studies were conducted on a local to regional scale. This study will broaden the view of Robinia Invasion in forests; the study area shall extend from Hungary to western France, with Luxembourg as a main central point. Methodologically, the study will examine pairs of wood stands, on one hand, stands composed of Robinia and stands composed of native wooden species, under similar environmental conditions, will be compared. On the other hand stands in urbanized environments will be compared to stands in rural regions. The main variables, that will be gathered, are species composition (α-, ß-diversity), climate data (on a larger scale) and soil features, mainly the N-content of the soil, as Robinia has the capability to bind atmospheric nitrogen. In the end we hope to have an answer to the following questions: